1983 – On Sunday September 18, Main Street was transformed into an outdoor boardwalk where artists and industrialists converged for the town’s first Community Day. It was described as an old-fashioned citizens day in which to educate residents about their town and give them a good time.

The festival featured exhibits from area industries, displays by agencies and churches, and demonstrations by artists and craft persons. It was highlighted by a soapbox derby. Musicians, bands and clowns performed and food and beverages were served.

This was supported by Boonton’s United Community Effort (BOUNCE) and the Chamber of Commerce.

1984 - Long before producers of the “Sopranos” used Boonton as a set location, Troma Entertainment auteur Lloyd Kaufman brought his crew to town and filmed the preposterous tale of Melvin Ferd III, a 98-pound weakling who, after being tossed out of a window by his tormentors into a vat of bubbling, toxic goo, mutated into a deformed-but-superhuman monster who embarks on a anti-bullying campaign. 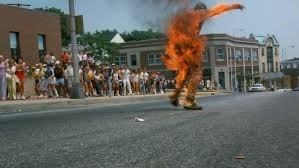 The film, a low-budget, cult-classic horror file, spawned three sequels, an animated children’s show and an award-winning hit stage musical. And for a short-time, Boonton was transformed into fictional Tromaville, New Jersey. 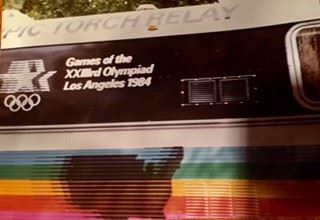 On Saturday, May 12, 1984, the Olympic relay torch arrived in Boonton. Mayor Anthony Bucco stated “this is a prestigious event for the town’. The relay traveled onto Main to Washington Street over the Reservoir Bridge into Parsippany.

The Boonton residents lined the streets with camera’s and video equipment. The Harmony Senior Drum Corp and the Boonton High School band were on hand to provide music.

Hawkers sold flags, balloons and hot dogs. The torch was gone as quickly as it came, but many on-lookers stayed for a few minutes, savoring Boonton’s momentary place in the Olympic event. 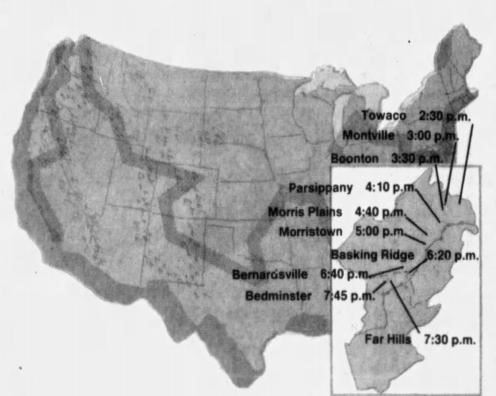 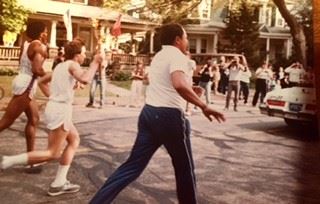 AT&T sponsored the Olympic Torch Relay. The Telephone Pioneers Of America worked alongside the Olympic Committee for 14 months prior to the relay, one the largest in the history of the Olympics.

Fred Zimny – Like most kids with a Flexible Flyer under their belly, Fred Zimny had his fair share of bumpy rides while sledding down he picturesque snow covered slopes at the Fireman’s Retirement Home in Boonton. Neither rain nor sleet nor snow could faze him as he circled his way around the rocks, under trees and over hills near his home.

Fred, a 1978 Boonton High School graduate became interested in luge racing while watching the Olympics in 1976 and thought he’d like to try it. He got a sled and practiced on slopes in Europe as well as Lake Placid, Central Park in New York City and in the Tourne in Boonton Township.

In 1977, Fred was second in the Amateur Athletic Union (AAU) junior championship and placed ninth in the International Competition at Innsbruck, Austria where he was the only American to bring home a medal. 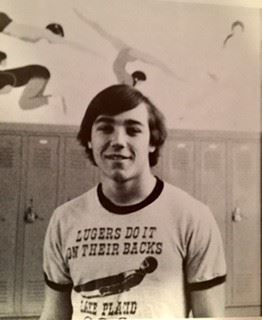 In 1978 at the U.S. Senior Nationals, Fred finished twelfth overall. In the Juniors, which is only eighteen years of age and under, Fred finished first. That place qualified him for competition in Austria. In another race for U.S. citizens only, he placed first again. 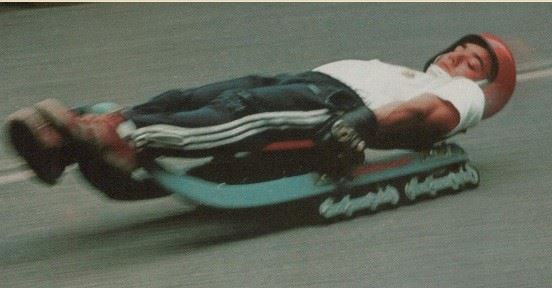 For the 1980 Olympics in Lake Placid, New York, he placed fourth in the luge races tryouts. He lost a third place finish by only one tenth of a second. He was named an alternated in the luge races for one or two-man sleds.

At the 1981 National Championship, he placed second.

In March 1980, Boonton held a “Fred Zimny Day” to honor his accomplishments.

He currently resides in Lake Placid, NY and is employed by the USA Luge.

In 1996, Fred was inducted into the Boonton High School Hall of Fame.

Some more info about Fred and the luge visit:

Abigail Powlett (Burden) – Abigail was the first women police officer in New Jersey to die in the line of duty in 1985. Abigail graduated from Boonton High School in 1969.

Officer Powlett was working the robbery task force and was investigating a call in the Meadowbrook Apartments for a man with a gun. Upon arrival, she and her partner encountered a man and began to question him. As Officer Powlett began to search him, the man overpowered Officer Powlett, took her service revolver and took her hostage. Shortly thereafter the suspect killed Officer Powlett as she lay on the ground. Backing officers who were on the scene shot and killed the suspect.

Abigail, who lived in Fanwood with her children, was one of 9 women on the 115-officer Plainfield force. She had served for three years, most recently as an undercover officer in the narcotics unit for the prosecutor’s office, an assignment for which she had received a commendation.

The funeral services were held at the Mount Zion Baptist Church in Boonton. Nearly 2,000 policemen and policewomen paid their last respects. A 250-car funeral cortege accompanied the flag-draped oak casket to the Evergreen Cemetery in Morristown. The color guard fired a three-gun salute. Her name is on the National Law Enforcement Officers Memorial in Washington, D.C.

Abigail was inducted into the Boonton High Scholl Hall of Fame in 2010 . 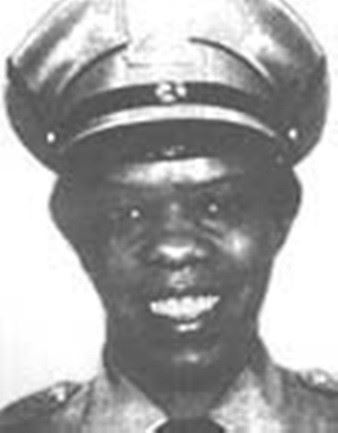 Ajit (A.J.) Khubani is an American businessman, the founder and CEO of “As Seen On TV” products company Telebrands.

After graduating from Boonton High School in 1978, A.J. attended Montclair State University where he majored in business administration while working for his father’s importing business.

“It was 1983, when one of the bestselling products on the marketplace was the Sony Walkman. It was selling for $60, which was a lot of money back then. I found that I could sell this particular AM/FM style radio that looked like a Walkman for about $10, so I spent about $7,000 — a third of my life’s savings when I was 23 — wrote an ad, put it in the National Enquirer and waited for the orders to come in.

I didn’t have any employees, so I shipped everything myself, typing all the labels on an IBM typewriter and delivering the goods to the post office. It was very exciting. I broke even, which gave me the encouragement to keep on going.

I thought if I could break even my first time out, then the more I learned the business, the better I would get. I continued with a couple more items and nothing really made money. The first two years I didn’t make any profit at all — I just continued to break even.” 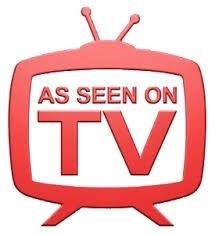 “By 1985, I came across a product — massage slippers. They were like beach slippers with bumps on the bottom that massaged your feet as you walked. I sold those for $10 and they were a relatively big success. My profit that year was about a quarter of a million dollars, which was a lot of money back then, at 25 years old. I think that’s when I knew I made it. I finally started to make a profit and I said, ‘This is going to work. This is something I can actually make a living off of and continue building the business.’

I was getting a lot of pressure from family members to go out and get a ‘real job,’ and they would say, ‘What are you doing wasting your time with this?’ It was a lot of pressure, but once I made that money, I decided I would continue to pursue it. The following year I really started to figure it out and I came across a few more products — a folding knife, an ultrasonic pest repellent — that were making money, and all of a sudden the business got really big. That year, in 1986, the business grew to $11 million, and I made a profit of $3 million. So I made my first million dollars at the age of 26. It was pretty good.”

A.J. was inducted into Boonton High School Hall of Fame in 2012.

It was the first death of a Federal drug agent in the line of duty in New York since 1972, and it brought one of the largest Federal rewards ever posted at the time in 1989 - $250,000 – and provoked calls by President Bush for a mandatory Federal death penalty in cases in which law-enforcement officer are killed.

Boonton resident Hatcher, a DEA agent and friend of Stutman’s, had been working undercover on the early stages of a FBI-DEA investigation – one of a Florida-to-Staten Island cocaine ring. Hatcher had met that night with “Gus” Farace, a Staten Island hood who ran cocaine for the Colombo and Bonanno crime families. Although no agent had seen Farace shoot Hatcher, he was the prime suspect – the only suspect.

Stutman decided to stop virtually every other investigation and mobilize his entire division: All 500 men and women would work on the Farace case. One hundred of them were assigned to the funeral, and the rest were looking for Farace and making things hard on the mob, raiding every numbers joint, social club, and mob-owned pizza parlors on Staten Island. The search spread to fifteen states but focused on Staten Island, New Jersey and Florida. But they didn’t find him.

Agent Hatcher’s wake was held Mackey Funeral parlor in Boonton and over 4,000 attended the service at St. Christopher’s Church in Parsippany.

Thousands of DEA and FBI agents and police officers from as far away as Canada lined the parking lot outside the church.

Hatcher had been an Army captain in the Vietnam War was a twelve-year DEA veteran, a family man with two young sons and a former schoolteacher.

In November of 1989, Farace was killed in a blaze of bullets fired from a blue van on a Brooklyn street in what law-enforcement officials said appeared to be an execution by local organized-crime groups. 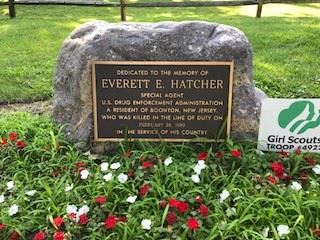 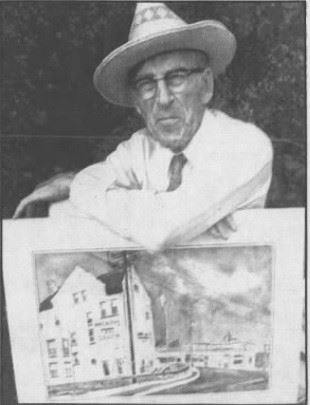 Each morning in the summer of 1983, Boonton local artist Russ Conn would don a big straw hat, carry his portable chair to Main Street and sit and paint for hours.

“People might have thought I was crazy out there in the heat,” said the 87-year-old Conn.

But the resulting 30 watercolors that detail Boonton’s landmarks buildings, he says, were worth the time and effort.

Conn, a lifelong Boonton resident whose paintings number more than 5,000, will be one the 83 exhibitors taking part in the town’s first Community Day Sunday September 18th on Main Street.

Sadly, four days later, on September 22, Conn past away suddenly from a heart attack.

Russell J. Conn came to Boonton in early life, graduating from Boonton High School in 1915. After college and decorated military service in WWI, Conn joined a family business of inventors making their fortune in supportive automation for Wall Street.

Retiring at 40 years of age, he gave himself to his passion of painting, traveling the world to paint and teach.

After his death, his only daughter Gloria was charged with relocating her widowed mother and settling estate affairs, invited St. Clare’s Hospital administrative director Sister Mary Urban to come to Conn’s studio and make a selection of 100 paintings of her choice. Confronted by almost 3,000 paintings. the hospital chose the readily available Main Street series along with others. Since 1983, the Main Street paintings have hung with other Conn watercolors on the walls of the hospitals Urban Wing 1st and 2nd floors in Denville.

Since 1984, the Russell Conn Award provides a cash prize to a winning Boonton High School senior who captures the face of Boonton in visual media.

During Boonton’s 150th anniversary year in 2017, a special exhibit of 19 Russ Conn paintings will be found in windows along Main Street. This effort was accomplished with the support of Saint Clare’s Hospital and volunteer Harold Johnson of the Boonton’s 150th committee. The watercolors were reproduced by John Castronovo’s Boonton Main Street business, Techphoto.

Local News of Boonton past

Taken from the Daily Record newspaper

Jan 31, 1980 – The PVO International Inc. laid off 90 workers. It was noted that PVO wants to sell the vegetable oil processing facility, one of the town’s oldest and largest factories.

An article in paper of August 1981 mentions two ‘suspicious’ fires at the vacant plant. One of the fires, a three-alarm blaze sent fire companies from Boonton, Boonton Township, Montville, Parsippany and Denville.