The Boonton Police Department was established May 20th 1867, by the Chosen Board of Trustees of the Town of Boonton, at a meeting held at the house of Charles P. Davenport. At this meeting a motion was made to appoint James Handville as Town Marshal and John H. Conine as Assistant Marshal. An ordinance outlining the duties of the Marshals was passed on May 29, 1867. This ordinance states that the Marshal was responsible for security, peace, and good order of the town.

He was responsible for the efficient execution of the law, regulations, and ordinances; to apprehend or seize civilly if practical, if not by force, and carry them before either of the Police Justices any person or persons who may be found violating the laws of the state or the ordinances of the Town of Boonton. Any person or persons convicted of an offense were punished either by imprisonment for up to 30 days in the county jail or other secure place; or by a fine of no more than $20 for the first offense. The marshal was able to call on any citizen or citizens for help in carrying out his duties. It was further ordained that said marshal receive compensation of $35 per year for his services.

While the duties of the Marshal were outlined in the Town Ordinance, in practice he found himself facing many different problems keeping peace and good order. Complaints of burglaries, theft, assaults, and the discharging of firearms, as well as health and nuisance problems such as drunkenness, noise, and garbage complaints. Taverns serving after hours, and miscellaneous animal complaints, kept the Marshal busy in the early days of Boonton. Other responsibilities that the Marshals had to perform were the lighting, extinguishing, and maintenance of the town’s oil street lamps, and the collection of Town taxes and the upkeep of the police lock-up. Their work hours were set by the Town’s Board of Trustees at 4pm to 4am, with their last responsibilities before going off duty being to ensure the saloons and taverns were closed, and to extinguish the street lights. Marshal James Gilmartin, who was originally appointed in 1881, was the first Marshal to be referenced as the “Chief of Police” in 1901.

On September 9, 1918 the Department lost its first member in the line of duty, Officer Patrick Guiton, who had been performing in the capacity of “Acting Chief of Police.” Acting Chief Guiton had deputized several citizens to assist in making an arrest of four individuals that were “looting a freight (train) car at the Boonton Rubber Works.” After making the arrests, Guiton dismissed the deputized citizens, and as he was transporting the men back to headquarters, one of the four produced a .38 caliber revolver that he had secreted and shot Guiton several times, killing him instantly. During the incident, the gunfire also struck one of the other prisoners, who also subsequently died of his injuries.

The suspect, who was originally indicted for murder, was later allowed to plead guilty to the lesser offense of manslaughter by the Morris County Prosecutor’s Office at the time, which drew outrage from the Town, and the family of Officer Guiton. This ultimately resulted in the Town’s Board of Aldermen passing a resolution to petition the New Jersey State Assembly to impeach Morris County Prosecutor John Mills for “failure to perform his duty in connection with the prosecution” of Officer Guiton’s murderer. 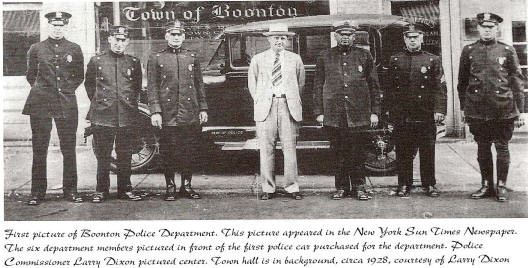 Chief Eli Vanderhoof succeeded Chief Gilmartin and served from 1925-1937. It was during this time that the Department had its first telephone installed (1927) and saw the purchase of its first police car (1928). Chief William Lucas then held the office from 1937-1945, which saw the Town and its Police Department adopt State Civil Service regulations. Charles McCoy then took over for twenty-five years, retiring in 1970. It was during this time that the Department saw its first African- American Officer and first female Officer hired in 1957 and 1958 respectively, and also issue the first portable two-way radios to Officers in 1969.

Beginning with Chief Stross’s tenure, the police department began embracing the new technology that is now pervasive in today’s law enforcement environment with the advent of the Department’s first CAD (Computer Aided Dispatch) Software (1996), which replaced the hand written ledger books the Department had been using for decades, a system of street surveillance cameras in and around the Main St. business district which allowed the desk Officer to conduct remote “video policing” (1997), and a computer-based fingerprint capturing system with digital scanner, replacing the traditional “ink & card” system of fingerprinting (2003).

Chief Stross retired in 2004 and the office was passed to Michael Beltran, who for the next nine years in office, continued the upgrades in technology with the addition of an upgraded computer based 911 system (2004), in-car mobile data computers (2005) and an upgraded CAD system capable of multi-jurisdictional information sharing (2009). In 2013, the office was passed to our current Chief, David J. Mayhood, who has further expanded the role technology plays in modern day policing, and who also made the decision to seek Accreditation for the Department with the New Jersey State Chiefs of Police Association, which if attained, is verification that the Department meets the standards of best practice of a professional law enforcement agency.

Beginning in 2013, under Chief Mayhood’s leadership, our department has acquired and now utilizes state of the art automated license plate readers (2013), new mobile data computers equipped with electronic traffic summons printers (2014), in-car digital video cameras (2015). And, for 2016, we will be instituting body worn cameras for every officer, which will add an additional layer of transparency and protection.

Also, in addition to a permanent “traditional” website, we have embraced the social media age and have Facebook, Twitter, and Instagram Accounts for the Department. We also utilize the Nixle text message based alert system for notifying the community about routine and emergent matters. These services allow us to communicate with residents and the media in an open and near instantaneous manner. Going forward, we welcome the advances in technology and their impact on policing in the 21st century.

- Special thanks to Chief Stephen Stross (Ret.) who compiled much of this historical data.