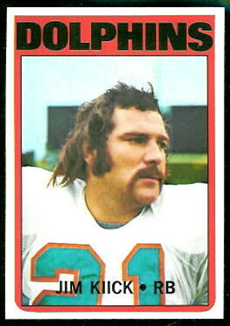 Jim Kiick - born August 9, 1946, he was raised in Lincoln Park and attended Boonton High school. He made the All-Morris County team, but as a defensive back, not as a running back, and graduated in 1964.

After high school in New Jersey, Kiick went west and played college football at Wyoming from 1965 through 1967, and was the Cowboys' leading rusher each of those years. He totaled 1,714 yards and ten touchdowns on 431 carries, and 561 yards and five touchdowns on 52 pass receptions. He was the first player ever to earn first-team All-WAC honors three times. As a junior, he was named the Most Valuable Player in the 1966 Sun Bowl.

Kiick played in the Senior Bowl, and was selected to play in the 1968 College All-Star Game against the Green Bay Packers in Chicago. Kiick was selected by the AFL's Miami Dolphins in the fifth round (118th overall) of the 1968 Draft, the second year of pro football's common draft. He signed a two-year, no-cut contract for $15,000 the first year, $17,000 the second year, plus a $7,000 bonus.

Although not blessed with breakaway speed, the 5 ft 11 in , 214 lb Kiick was a versatile player; in addition to being an effective inside power runner, he was also an excellent blocker and clutch pass receiver. He had over 1,000 yards combined rushing and receiving in each of his first four years.

Kiick played in three consecutive Super Bowls with the Dolphins.

In Super Bowl VI, he rushed 10 times for 40 yards, and caught three passes for 21 yards, but the Dolphins failed to score a touchdown and were trounced by the Dallas Cowboys, 24–3.

In Super Bowl VII, he caught two passes for six yards, and rushed 12 times for 38 yards, scoring the decisive touchdown, a one-yard blast, as Miami defeated the Washington Redskins 14–7, completing their perfect 17-0 season.

In Super Bowl VIII, he rushed seven times for ten yards and scored the second of Miami's three touchdowns, diving in headfirst from the one yard line (his only touchdown of the 1973 season). It was said by Kiick, "my specialty--the one-yard gallop. Miami dominated the Minnesota Vikings, 24–7.

Jim Kiick and Larry Csonka were roommates at training camp and on the road. Their hell-raising typically included consuming large quantities of alcohol. 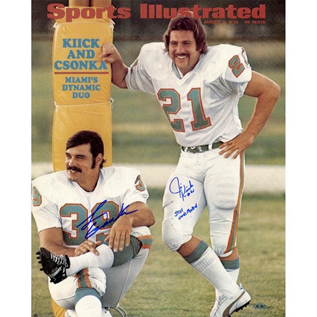 In 1969 sportswriter Bill Braucher of the Miami Herald, upon hearing of their exploits on and off the field, dubbed them "Butch Cassidy and the Sundance Kid" (Csonka was Sundance, Kiick was Butch).

A TV film was made of their exploits, showing them riding horseback into the sunset on Miami Beach, and they even posed for a poster dressed in western garb.