Someone ought to do a serious study of what makes a town a community. The subject could be researched in Boonton, a community in the richest sense of the word.

Projects that would surely sink elsewhere, float in Boonton. They come sailing in, powered by… what? Propelled by some elusive something that might be called civic pride, if you were in a pinch and had to give it a name.

Why does Boonton seem to own, effortlessly, something other municipalities are striving to win?

If it’s a secret, it ought to be shared.

Boonton isn’t a big town. It’s not populous, not affluent. It will never win a beauty contest or a planning prize. It’s an industrial town, with the smoke and the smell to prove it. 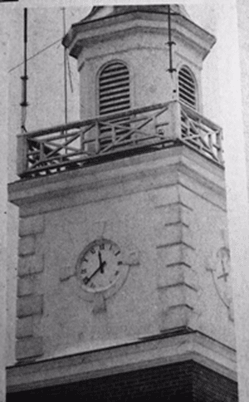 But, Boonton has bigger, richer, prettier  neighbors that can’t brag of summer concerts at an old fashioned  bandstand and could never hope to pull off the kind of happy, swinging,  hoopla of a centennial celebration that Boonton enjoyed this year. And  now Boonton has a town hall tower designed for a clock with four faces.

Of  course any municipality can decorate a tower which clocks. All you have  to do is appropriate the money. In Boonton, though, contributions are  paying the price. Donations from firemen and veterans groups and  individuals, dimes from school children are buying the clock faces.  Right now, three faces have been paid for and funds are needed for the  fourth.

On December 31, when a dedication ceremony is held and  the clock is lit, people of Boonton will have more than just a new way  of telling the time. They’ll have another personal investment in the  town. And maybe that’s Boonton’s secret – there’s a personal  relationship between the people and the town that isn’t found elsewhere.

May 21,1964 – Contracts totaling $378,643 were awarded by the Mayor and Board of Aldermen on Monday night for the construction of a new Town Hall at the site near the corner of Washington Street and Lathrop Avenue.

The work is expected to begin around the first of June with completion date about a year away.

August 3, 1965 - Sealed bids will be received by the Mayor and Board of Alderman for landscaping and sodding the new Town Hall

October 18, 1965 – The Mayor and Board of Alderman met for the first time in the new Town Hall at 100 Washington Street. 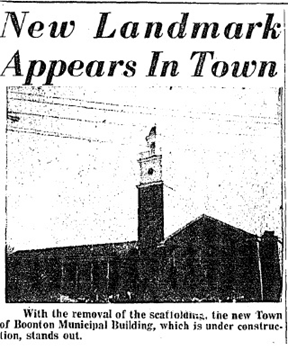