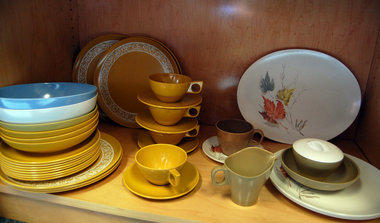 After World War II many plastic manufacturing companies had to rethink their product line since they were no longer producing plastic for the war effort.

Boonton Molding Co. owner George Scribner decided to manufacture melamine plastic dinnerware that was popular with the U.S. Navy during the war because it was virtually indestructible.

In 1946, the Boonton Molding Co. started producing its own line of plastic dishes - Boontonware.

Boontonware  helped transform Boonton from an obscure 18th century iron town to a  common household name. Its popularity was due in part to its durability  and relatively inexpensive price tag.

But the line of plastic dinnerware remains a popular item on the kitchen tables of America.

Nowadays,  Boontonware is molded 400 miles west of Morris County in Ashtabula,  Ohio, by GMR Technology, a plastics molding company that purchased the  Boontonware name and rights to the molds in 2001.

Built in 1918, Schultz Park was located on Main Street in the 500 block where Don’s Sandwich Shop and Bob’s Men’s Shop are located today.

The gazebo was built on land that was donated to the town in 1910 to be used as a park. The donor was General John S. Schultz, and the park was named after him. To be truth­ful, the park was not very park like. It was not a large, flat parcel of land.

It was a small, nar­row parcel of land that dropped off steeply to Plane Street below. Yet articles written about the park at the time of its donation boasted its mer­its, “perpetuates a magnificent view”, “beautifying the town”, “keeping open one of the most pic­turesque views.” The general feeling was the park was a valuable addition to the town not for the property itself, but for the view that the property afforded.

The deeds for the property spelled out the conditions and covenants that would protect the property. The covenants would “run with the land and bind the successors, heirs, and assignees... the property is conveyed for public use or park purposes and that no structure shall be erected that will obstruct its view from Main Street.” Additionally, the deed stated, “Whenever the above conditions are not com­plied with, the title to the land... will revert to the heirs...of John S. Schultz.”