Mother Joseph was elected Mother Superior of the  Caldwell Dominican Sisters in 1927 and re-elected in 1933. Due to her  involvement in the creation of Caldwell College for Women at the time is  was suggested that she be permitted to run again for re-election. She  was indeed re-elected for a third term on the first ballot! 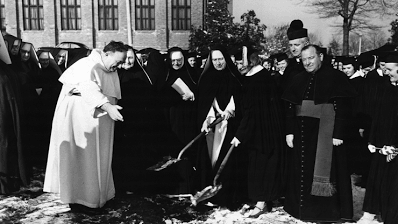 In 1927, Mother Joseph sought permission  to erect a junior college in Caldwell, however, the request was denied  as the Bishop felt the need for a woman’s college was already met by the  College of Saint Elizabeth at Convent Station.

Mother Joseph  never abandoned her dream of a college. On June 21, 1939, the Bishop  announced that a college for women would be opened in Caldwell by  September. Mother Joseph and her Council had done the impossible. They  had created the College amidst the Great Depression and war. The college  officially opened on September 22, 1939, as Caldwell College for Women,  with thirty-four students. By 1947, the college’s enrollment had  increased to 170. Just as it is now, the faculty and student body were a  close-knit community. The spirit of the family was nurtured by the  creation and fostering of many Dominican traditions.

After the blessing of the cornerstone for Raymond Hall, the Honorable Alexander P.  Waugh a lifetime resident of Caldwell and dear friend to the sisters,  spoke of the sisters and Mother Joseph, “Dominicans were not standing  still. Great things were happening…Mother Joseph’s name was legendary in  the Caldwell Community. She knew what Almighty God wanted her to  achieve – and she knew how to obtain material to achieve those  objectives. That quiet, able nun on the hill was a mental match for  anyone in the Community.”

At the age of 71 Mother Joseph Dunn  passed away on Good Friday, March 30, 1956. As the foundress of Caldwell University, she has left behind a legacy of carrying and passing on the torch of truth through education and the zeal for the Church, marked with the Dominican spirit. 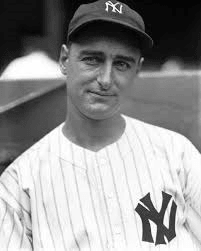 Frank ‘Dins’ Makosky, (1910 – 1987) born in Boonton, Frank graduated from Boonton High School in 1930  and is believed to have earned 16 letters - 4 letters each year in  football, basketball, baseball and track. According to Franks son, he was offered 17 athletic scholarships but did not accept any. He continued to play baseball in local leagues, married and worked locally at Dixon Brothers delivering ice.

Shortly after his first son (Frank) was  born, he was scouted by the New York Yankees. He played for their farm  team the Newark Bears from 1934 through 1936. Towards the end of the  1936 season, he then was brought up to the parent team. The Yankees  wanted him to pitch batting practice. His son Frank remarked “They were  going to play the NY Giants in the World Series and the Giants had a  great pitcher Carl Hubbell. He threw a pitch he called a "screwball" and  the Yankees knew that my father's "forkball" acted much like Hubbell's  screwball so during batting practice my father threw nothing but  forkballs”.  The Yankees won the 1936 World Series.

He made his  Major League Baseball debut with the New York Yankees in 1937 as a  pitcher. In 26 career games, he had a 5–2 record, with a 4.97 ERA. He  batted and threw right-handed. Frank played on the same team as Lou  Gehrig, Joe DiMaggio and Lefty Gomez to name a few.

According to his family they believe the nickname  ‘Din’s was given to Frank by his classmates in sort of a perverse way  because he was so quiet. “The word ‘din" means loud and boisterous”,  Frank Jr said.  He was inducted in the Boonton High School Hall of Fame  in 1996.