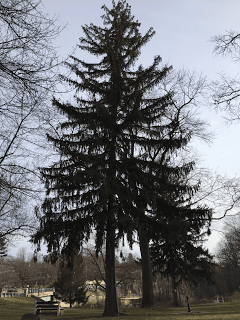 1932 marked the bicentennial of the birth of George Washington.

Throughout  the country, celebrations and commemorations were held. Coins were  struck, twelve new stamps issued, and plates of varying sizes and  designs were sold.

In Boonton, the Garden Group of the Women’s  Club sponsored the planting of a 22 foot white spruce tree in Grace Lord  park “so that Boonton would have a permanent community Christmas tree  that would also serve as an everlasting memorial to the father of our  country in whose honor we are asked to plant trees”.

Since this was a community project, all  organizations and lodges in Boonton were asked to participate in the funding of this tree.

A dedication ceremony was held  in Grace Lord Park on July 20, 1931, where “every man, women and child  in Boonton” was invited to attend.

The tree was registered on the national honor roll of the American Tree Association as a George Washington memorial tree. 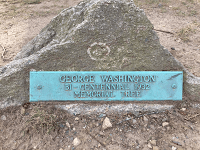 The Kiwanis ambulance received its first call early last Friday responding to a call made by Dr. C.A. Musetto who gave first aid to Herbert Romaine of Beverwyck Road, Boonton Manor when he fell from his motorcycle when attempting to make a turn on Beverwyck near the Knolls.

The call was received Friday morning at 7:45, arriving at the scene at 7:52. Boonton Kiwanis made the trip to Morristown Memorial Hospital with the patient in 29 minutes, arriving there at 8:21.

The driver was Clifford Vorhees.