1890 – Sarah Green purchased the building at 715 Main, known then as Independence Hall and named it “The Boonton Opera House”

The  New York Telephone Company installed the first Boonton switchboard. One  of the first to subscribe was John H. Brown, who had the easy number to  remember “Boonton 1”. The cost per year was $42.00. 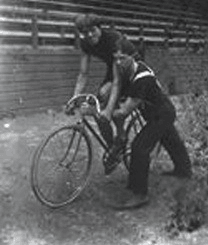 Between  Lincoln Street and the Rockaway River, and crossed by the extensions of  Dixon and Dawson Avenues, is an area of several acres that for two  centuries has been known as “the Witch Grounds.”

When  first discovered, it was surrounded by dense forest, but the area  itself was absolutely barren and the earth was hard-packed as a “barn  floor.” This strange place was regarded with dread and superstition by  the early settlers who explained (at least to their children) that this  was the place where witches danced.

In  the 1890’s E. B. Dawson built a ¼ mile track and grandstand near this  spot, the oval track being contained in the square formed by Dixon and  Dawson Avenues and Lincoln and Forbush Streets.

Mr. Dawson’s  son, Ray, was Captain of the bicycle teams of Columbia  University and the New York Athletic Club, and was at one time a  national champion bicycle racer.

1904 - New Boonton Railroad Station built. It was described back then as follows:

The  street level held a smoking room, women's room, newsstand and express  and baggage room and an elevator. The station on the westbound tract  harmonizes in architectural construction with the main building and has a  large waiting room. Both buildings are furnished throughout in oak and  patent plaster walls.