Elizabeth Heitmann Geiger was a well-respected doctor of Naturopathy. She was one of the first women to graduate from Dr. Lust’s School of Naturopathy and had a practice on 55th Street in New York from the early 1920’s – 1960 when she retired to live full time in her home on Fanny Road.

Naturopathy, a “drugless medicine,” favors an holistic approach to illness with minimal use of surgery and drugs. It is a system of alternative medicine based on the theory that diseases can be successfully treated or prevented by techniques such as control of diet, exercise, and massage. She only treated women and many well-known patients came to her clinic including Gwendolyn Bolger (wife of Ray Bolger, the Scarecrow in the Wizard of Oz), Mary Rockefeller (first wife of Nelson) and writer-actress Gertrude Berg of the Goldbergs radio comedy show. She lived in her house on Fanny Road for over 80 years.

After a career in journalism, precipitated by the need to support his family, in 1901, at the age of 31 Henry Blauvelt Wilson was able to afford to go to Seminary.

He continued to write and support his family and stayed in Seminary going on to post-graduate work.

He started St. John's School in the rectory with only 4 students. The school was later renamed the Wilson School and is today in Mountain Lakes. 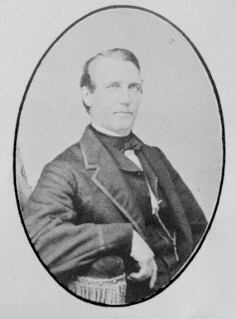 Holmes was born March 7, 1815, in Massachusetts and moved to Boonton in 1850 to take charge of the Taylor & Lord Nail Factory.

He laid down roots in Boonton and he developed a strong loyalty to the town and committed himself to its development. He became very involved in local politics and used his fortune to help develop municipal organizations and community projects.

Holmes held several political posts in his life such as serving as Mayor of Boonton, on the State Board of Education, and on the Boonton Board of Education. Holmes also used his wealth to improve the town, one example was when he donated the land and purchased the equipment to begin the firehouse in South Boonton. He served as a volunteer fire fighter in Boonton from the time he arrived until his death.

Upon  his death, James Holmes’s residence on the corner of Main and Church  was willed to the people of Boonton for use as a public library. The  doors opened in 1894 and has have been proudly serving the town of  Boonton ever since.

On Nov 30, 1972, The Boonton Holmes Public Library was placed on the National Register of Historic Places.

Charles Grubb was the owner and editor of the Boonton  Times.  A native son of Boonton, after reaching manhood he became an  iron worker and eventually engaged in the manufacture of nails as a  member of the firm of Patterson, Anthony, & Grubb. He served as one  of the first councilman of Boonton. After attending school in Boonton,  he became an apprentice at the trade of printer, working for a time in  Boonton and later going to Bangor, Pennsylvania, where he finished his  training under the instruction of his brother, William.

In  1895, and rented rooms in the basement of Boonton Holmes Library where  he installed printing presses. The first edition of the Boonton Times  was published on October 4, of that year. The paper was well known  throughout Morris county, and read extensively by the citizens of  Boonton.

Helen  Gahagan Douglas (1900-1980) – Born in Boonton, she was the third woman  and first Democratic woman elected to Congress from California; her  election made California one of the first two states (along with  Illinois) to elect female members to the House from both parties. She  also ran against Richard Nixon in the 1950 California Gubernatorial  race. She was married to actor Melvyn Douglas.

John Phillio Holland was a lay teach at Our Lady of Mount Carmel Church later achieved fame as inventor of the submarine.

I  took some pieces out from the Local News section from the Bulletin that sounded interesting. Perhaps to be posted throughout the months on  social media?