This article although not sure if it is true, or ‘tongue and cheek’ might be entertaining.

Dear  Bulletin – I would have communicated before, but the wind blew me out  of the bed on Monday night last week; since which time, I have been  somewhat deficient in penmanship – the Dr. says my wrist is only  sprained and will come out all right.

I  have read a good deal first and last about what high old times the wind  and snow have “Out West”, but have never had any blizzard experiences  until last week. The wise men who manufacture the weather announced a  storm, so everybody naturally looked for fair weather and thought it  unnecessary to lay in more than the usual stock of eatable and things.

Unfortunately, Yours truly was one of the short-sighted multitude

I  ran over to the “bill of fare” on Monday night, and found it consisted  of snow, fried wind and eggshells. I thankfully partook and went to bed,  but as I said at the top, did not stay there all the time. Tuesday  morning the “bill of fare” was similar to what mentioned above, with the  addition of skip, which I thoughtfully left for a noon lunch.

After  filling up, I put on what clothes I had and crawled up the chimney to  see if I could find out where I lived. I braced myself against the few  bricks that were left, (most of them had gone away), and gazed around.  What a change! Every landmark had disappeared and nothing was left to  remind me of the dear old home of my childhood. I was just preparing for  a genuine “let her go Gallagher?” weep, and the wind changed. So did I.  I wanted to swear, but my condition was too critical.

How  long might I remained “doubled up’ in the 18 feet snow-drift would have  been recorded in the obituary notice, had not a friendly tree near by  extended a helping hand. When I landed it was not upon my feet, or my  head, but somehow I struck and average. The hand aforesaid reached out  as far as the parent trunk would permit, whispering “come up higher”,  but I couldn’t. Finally, after many vain attempts, I made one desperate  lunge, and thank Heaven, I was saved – about halfway.

As  I sat in that old tree, a lone inhabitant of air (and cold at that)  with no eye to pity and no ladder to climb, I naturally thought of the  last half – feared I might freeze to death, and probably I did, for all  was soon lost in oblivion.

Things  begin to look more natural again. There were snow-banks in this  neighborhood 39 feet high, more or less but they are rapidly  disappearing. Everything is coming out again. As I look out of the  window I notice about two inches of something black and round sticking  out of a snow-drift.

The old cat has not been home since the storm, still that has nothing to do with this account.

I  read in the Bulletin, and other papers sad stories of loos of life  during the great storm but some of them may be lies. I think however it  is wrong to exaggerate at such times.

There  was another blizzard “set down” for Tuesday of this week, but for some  reason it was indefinitely postponed. When it comes off, for friendship  sake, dear Bulletin, write a nice little poem, not too sad, but just sad  enough, to them memory of your departed. - author unknown 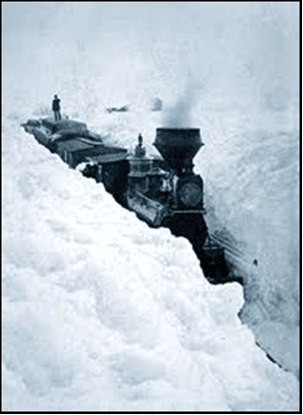 By  noon the Blizzard of 1888 that paralyzed the eastern sea-board had  descended upon Morris County with a violent rage, that would continue  unabated for 36 hours.

The  temperature dropped to zero, and the harsh gale left snow drifts of  more than 15 feet that blocked roads, knocked out telegraph service, and  caused extensive damage to residences, businesses, and churches.

Windows  were smashed, chimneys overturned, and roofs torn off—all due to the  hurricane-like conditions that prevailed. For four days, no milk or  news-papers were delivered, local butchers ran out of meat, and food  provisions grew scarce.

Coal dealers could not adequately supply households, and families were left without heat in the bitter cold.

Travel ceased; the only train to leave Morristown on Monday morning got stuck near South Orange and could go no further.